Posted on July 29, 2015 by Angela Ivanova in Uncategorized | Leave a comment 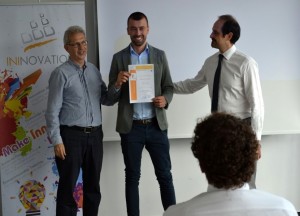 On July 29th, 2015, representatives of different innovation management organisations from all over Europe met in Darmstadt, Germany, to grant the four best start-up companies of an international eCare innovations pitching event the UNCAP 2015 INNOVATION AWARDS.

UNCAP is the abbreviation of “Ubiquitous Interoperable Care for Ageing People”. It is a pilot-centric innovation action, driven by several high-tech SMEs with support from few research centres. UNCAP aims to deliver a suite of innovative ready-to-market ICT products and services, specifically designed to help elderly people with cognitive impairments live a more independent life. UNCAP maximises use of standards to create an interoperable open infrastructure that leverages on location and sensor-based technologies to create radically new paradigms for service care delivery. The project is co-funded by the European Commission under the so called Horizon 2020 programme activities (reference no. GA 643555). 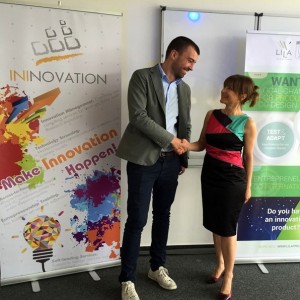 UNCAP targets the establishment of a transnational innovation ecosystem for eCare, in which innovation management and business spin-off tasks shall be performed in a global scale. In this context, the first UNCAP INNOVATION AWARD event was organised to provide eCare innovators and entrepreneurs the floor to introduce their technologies underlining future eCare solutions. An international jury recruited of market and technology experts evaluated the presentations, ranked them and selected the four best pitches for the UNCAP INNOVATION AWARD. The first price was awarded to “CHINO.IO” (Italy), providing secure API and storage for health data according to EU laws and regulations. The winner, Jovan Stevovic, received the award from the UNCAP co-ordinator, Dr. Giuseppe Conti (Trilogis) and from Dr. h.c. Wolfgang Kniejski (EIT Digital Business development Acclerator), Chairman of the UNCAP Innovation Management Team.

The UNCAP INNOVATION AWARD 2015 grants a free participation in the UNCAP Conference in Nottingham (UK) in September 2015 (including travel and all related costs) as well as a free booth at the conference exhibition and promotions support. Impressed by the vast knowledge that CHINO’s Managing Director proved during his presentation, the UNCAP management team decided spontaneously to accept CHINO as an associated partner and to grant a subcontract for consulting services in the area of regulations and requirements in commercialisation of eHealth and eCare applications. “I am proud and happy that the winner of our UNCAP INNOVATION AWARD 2015 will play a significant role in the project activities”, the leader of the business modelling work package, Ms. Angela Ivanova, stated during the award ceremony.